We’re not alone in our adoration for this global staple — tomatoes are the world’s most-produced vegetable (or is it a fruit?) —  and we want to shout it from the rooftops.

In 1883, for the first time in documented history, enterprising theater-goers became so disillusioned with the action on-stage that they took to pelting the actors with rotting tomatoes, permanently raising the bar for slapstick comedy and forever putting performers on notice: entertain us, or pay the ultimate, tomato-stained price.

How did this fruit — or is it a vegetable? — become such an abundant global commodity that by the second Industrial Revolution, bored patrons of the arts felt no qualms over performatively wasting it?

A Brief History of Time… atoes

Today, tomatoes are about as close to a universal ingredient as you’ll find across the many distinct cuisines of the world. They are easily grown, and are an extremely productive plant, not to mention their tangy, sweet taste lends itself perfectly to sauces, stews, and soups.

As with the case of nearly all crops at this point, how tomatoes came to be a worldwide culinary darling has a lot to do with colonialism. But in the beginning, they were small, wildly growing, and native to western South America.

They came to resemble the tomatoes we know today by 500 B.C., at which point they were domesticated by the Aztecs and other Mesoamerican peoples. From the jump, tomatoes were incorporated into flavorful sauces with various chiles. In that regard, one of the tomato’s finest contributions — salsa — hasn’t changed much over the past 2,500+ years.

Tomatoes were first brought to Spain in 1521 following the capture of the Aztec capital city, and from there, the plant was shipped along established trade routes to various other parts of Europe — notably along the Mediterranean, which proved a perfect climate for their cultivation — and into China. The plant’s spread and quick incorporation into local cooking continued into India, the Middle East, and North Africa, then eventually North America, too.

Today, tomatoes are grown in every corner of the world, including in greenhouses in places like Siberia.

Are tomatoes fruits or vegetables?

If you came to this article expecting a definitive answer to this age old question, sorry, you aren’t getting it. By some measures, botanically, for instance, tomatoes are fruits. By others, such as culinarily, they’re vegetables.

However, if you’re inclined to put much stock into the rulings of the United States Supreme Court, you might be interested to know that in 1893 the justices unanimously agreed that the tomato — on the basis of how it’s most frequently used by chefs — ought to be permanently classified as a vegetable.

At least legally speaking, that’s what we’re working with.

But what about nutritionally?

The nutritional highlights of tomatoes

On top of being the basis for some of life’s greatest dishes, tomatoes also pack a powerful punch in terms of vitamins and nutrients.

Your garden-variety (colloquially or literally) tomato provides you with over 25% of your recommended daily value of vitamin C. It contains potassium, vitamin K, and vitamin B9, known as folate. And it’s among the best sources out there of lycopene.

And if we’re talking tomatoes’ “greatest nutritional hits,” lycopene would be track one, side one. It’s a truly powerful antioxidant, and may protect our bodies from sun damage, improve heart health, and even lower the risk of certain cancers. While fresh, raw tomatoes are a terrific supplier of lycopene, it’s when tomatoes are cooked (which is how processed tomato products like ketchup or pasta sauces are made) that our bodies are best equipped to soak up all that beneficial lycopene content.

Get your tomato fix, with a kick

We could go on. (And on, and on, and on.) We’re just that excited about tomatoes! Because they’re the star of several of our brand new bowls.

In addition to being our most descriptively named smoothie, it’s also perhaps our boldest-tasting. Its garlic, onion, and cayenne pack a punch, and help this new tomatoey addition to our lineup check all the boxes you’d want from a proper virgin Bloody Mary.

Sip it on its own for a vitamin-loaded wake up call. Stir it into a soup for an added complexity of flavor (plus 2.5 more servings of organic produce). Or go ahead and add a splash of vodka during happy hour for the easiest Bloody Mary you’ve ever made.

Spice up your next kencko order. Give this zesty newcomer a shot! 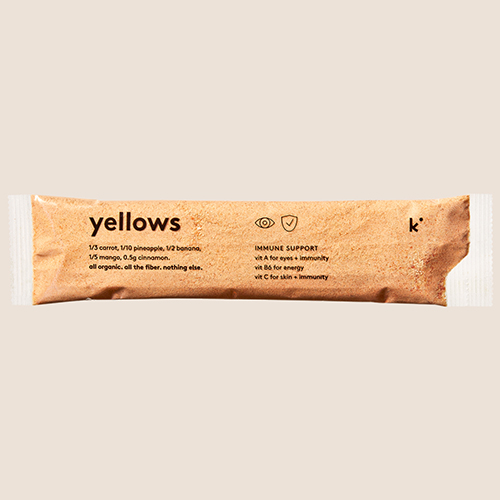